A look at Chimfunshi from 2019 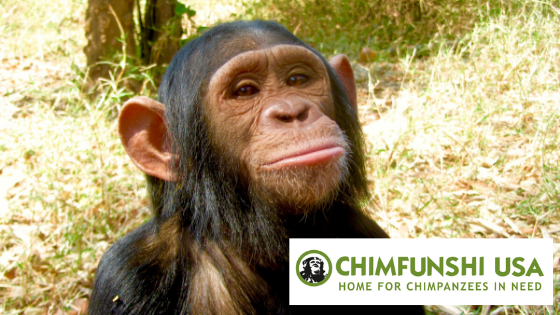 Due to Zambia´s economy, the year 2019 has been a tough one for all those living in Zambia. Food and fuel prices are going up and the local mealie-meal prices are going higher and higher.  Chimfunshi has being affected by these changes when it comes to purchasing fruits for the chimps, and also the supply of mealie-meal which is a critical part of the chimp’s daily diet.

With each new day Chimfunshi faces new challenges – yet we never give up!

July was an exciting month for our two youngest rescues John and Victoria who arrived at Chimfunshi in November 2018. When it was time for them to be integrated into a family group, the process is done slowly over a period of time, as each chimp from the family group has to meet the newcomers in advance, spend time with them playing, sharing a night room, testing who gets along with whom. It always starts with the youngest of the family group, in this case, Annie and Commando. Within the following weeks, John and Victoria met everyone in the group. The bigger chimps played roughly with the two youngsters. John, a tough little boy, played roughly while Victoria ran for cover as she is a shy little girl.

On 23rd July the doors were open and the group of nine chimps all met for the first time as one group in our outdoor area. Alpha male Congo rushed over to John, placed him on his back and headed off into the enclosure with him, leaving Victoria standing all alone trying to work out where she should run or who will protect her. Juma is the one to take care of Victoria with the help of Annie.  There was only one chimp left to integrate, and that was Miriam. 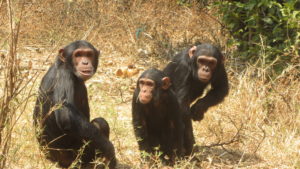 In August we began to integrate Miriam, who arrived with John and Victoria. Miriam was the last chimp to be integrated into our Sudan family group. Known as the wild child, Miriam is always testing the wires and playing roughly with John and Victoria. The time arrived for her to meet chimps of her size like Juma and Congo. Juma was the first. Fear was shown in both chimps as they tried touching each other between the bars.  Integration is something that cannot be rushed.  Each new day a new chimp will meet with Miriam, the joys of first-time play and sharing are something every chimp goes through.  One month later we thought it was time for Miriam to go out into the outdoor enclosure as part of the family group.  We were all amazed as she wandered out like part of the family group and headed off to do her exploring with none of the other chimps following. From that day forward Miriam became part of the family group and may, one day, become the alpha female.

A yellow female Baboon Spacio arrived from Munda Wunge. She was rescued in Kitwe September 2018 taken to Lusaka to Munda Wunge where she was looked after for a while. It was then thought that bringing her to Chimfunshi for better long-life care would be best for her. At first, she battled to adjust to her new cage, unsure of the structures to walk along although. She was very quick to find her feeding dish filled with peanuts one of her favorite treats. Spacio has now settled in and is even used to the wild vervets who often come and raid her feeding bowl.

Ten days later Chimfunshi Wildlife Orphanage Trust celebrated 37 years of being in operation at our Education Center. Sheila gave a short speech and the local school children started the celebrations with the Zambian National Anthem. With fun and laughter, the staff divided all up into teams and the games began. Each different team wanted to be the winner. 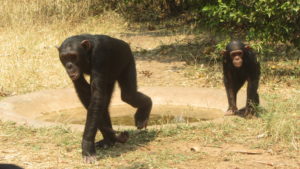 Miriam and Victoria exploring their enclosure with their newfound family

November the rainy season begins inside enclosures there are not too many wild fruits available right now although the chimps enjoy the lush and green vegetation foraging for fresh bark to chew on, variety of fresh green leaves and fishing for termites. Yet for the chimps the Mango season is their favorite season of all. If they had one choice the chimps would eat mango and nothing else.

Exciting times are still to come in 2020 as our top escape artists Milla, Cleo, her son Collin and Chiffon have their newly built enclosure almost complete and ready for testing.

Help us towards a more sustainable and secure 2020 by donating towards our food costs. Thank you, as always for your support and have a Merry Christmas and a happy New Year! 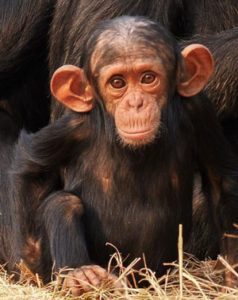